It was 4:30 in the afternoon on a Friday, in Aisle 6 of a Coles grocery store in Brisbane Australia, when it hit me: I am a Southern Woman of a Certain Age. I knew it to be true when these words escaped my lips “What am I going to do?! They don’t have Duke’s mayonnaise!”

Though I had never made pimento cheese myself before, I intrinsically knew what all people raised in the American South know- you cannot make a proper pimento cheese without Duke’s mayonnaise.

Of course- you can’t make it without pimentos, either, and they didn’t have a can of these either. Which didn’t bother me so much, because I’m actually not sure what a pimento even is- a pepper maybe? After seriously considering buying a jar of olives and pulling the little buggers out of the middle, I decided instead to substitute a can of diced red capsicums (which is just Australian for bell peppers).

But I had committed to making pimento cheese for a potluck, and dagum it, I was going to do just that.

After my little moment over the lack of Duke’s, I realised that I would have to buck up and settle for what my Gramma Dee would have called a “make-do.” So, I sifted through too many aiolis (which is just fancy talk for flavoured mayo), “traditional” mayo (which is code for knock-off Miracle Whip) and settled for a little jar of “whole egg” mayonnaise. And now that we all know too much about my mayonnaise dilemma- let’s ignore the sound of my grandmother doing cartwheels in her grave and get to my recipe for Makeshift “Southern” Pimento Cheese.

*Not many photos for this post- as I was too busy cooking. Scroll down to the end to see the scrumptious results!

**in the spirit of my Gramma Dee’s recipe process, the amounts listed here are merely suggestions. Feel free to interpret them however you like:

After figuring out the pimento cheese situation, I started hankering for other Southern delights. I wanted shrimp and grits (guess what- no grits here!), biscuits and gravy (hey there- none of the white sausage or “sausage” gravy packets I had come to rely on back home), succotash and slaw.

So, I set to figuring out how to make that happen.

Before I give the recipe I used, I’ll go ahead and dispel this Crocodile Dundee myth of Aussie’s throwing “shrimp on the barbee.” Just like Foster’s is NOT what they drink, shrimp is not what they eat. They have prawns- which is not another word for shrimp, it is in fact a different (though similar) creature. It’s like calling a crawdad a lobster. Not the same.

This is the quintessential Southern “vegetable.” The dish has Native origins- and is closely related to the Three Sisters- which is a legend/recipe/crop growing method enjoyed across the Indigenous Americas. You can read more about the Three Sisters and get the recipe through THIS LINK -scroll down to page 49 (which is a shameless piece of promotion for my non-profit Zomppa).

You can really make succotash any kind of way, so long as you have lima beans and corn. I usually add squash or zucchini, as the ingredients combine to provide all the needed nutrients to our bodies. Tomatoes and peppers are good in it, too. And okra- because okra is good in EVERYTHING. For this one, I went simple.

I’m not trying to get into any fussin’ about coleslaw here. To alleviate the Great Slaw Debate, I’ll go ahead and say that this isn’t the kind of slaw you’d want on a (*ahem* Eastern style VINEGAR based) pork bbq sandwich. This isn’t that icky-sweet industrial stuff that comes in lidded shot glasses from fast-food joints. This is halfway between mayo and vinegar based slaw. This is a side dish. And it has craisins (dried cranberries), for no other reason than that I like them in it. You can take ‘em or leave ‘em. 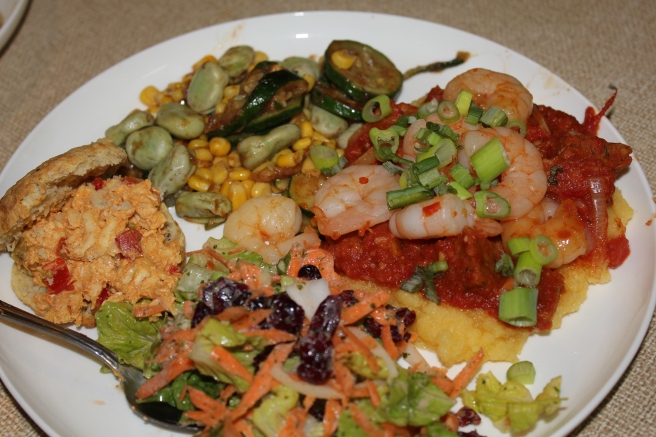 This is the meal we had the other night. With my make-shift “Southern” ingredients. I made biscuits, too, which we ate with the pimento cheese. I’ll get to work on figuring out how to make breakfast gravy and report back after I’ve ruined a few batches.

Today, I will rest easy knowing that I did me “durn best” to honour the recipes of my people back home. Gramma Dee is hollerin’ at me from the beyond about that Duke’s mayonnaise (she would have sent me a jar- express mail!), but I’m sure she would be secretly proud that I even tried to find it. Who knew those micro-lessons would ever take hold?

… and this, my friends, is when you come into your own as a true Southern “belle.”